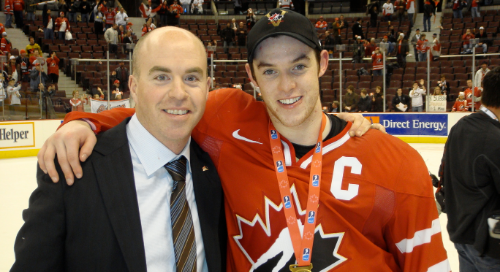 Find out what life is really like for a physician in the world of pro sports—in the clinic, at the rink, and on the road

Was a career in sports always your dream?

I didn’t have my life planned out from an early age – and I certainly wasn’t thinking about sports medicine when I was a kid – but, yes, I was passionate about athletics, and throughout my life have pursued a few different sports; high-level youth soccer, high school and university basketball, provincial baseball; I also ran cross-country and track, have done a few marathons, and more recently have won a couple national Masters championships racing road and mountain bikes. Like most athletes, I got hurt—a lot. Pretty much every injury you can have, I had it: sprains, muscle tears, broken bones, concussions.

Did those injuries give you a unique perspective on sports health?

Going through all of that, I’d become really interested in biomechanics, anatomy, physiology, etc., so, when I finally got to the point in my life where I had to figure out what to do with myself, it felt like a natural transition to go into medicine. Because I’ve been injured so often myself, I think I have a natural empathy for people – especially athletes – who are hurt. It’s funny—it seems almost inevitable, today: my mom was a nurse and my dad was a phys-ed teacher, and, in a way, I’ve brought their two unique career paths together into my own.

What academic path did you take to get where you are?

I did my undergrad at the University of Victoria, in their kinesiology program. I had always been a competent student, but, now that I’d finally found something I loved, my grades started getting better and better. This helped me get into med school at UBC, and I eventually did my residency in family medicine in Calgary and then challenged the CASEM exam to get my diploma in Sports Medicine.

How did you start working directly with teams?

I got the opportunity that would define the path of my career through Dr. Jim Thorne, who ran a blended sports medicine/family medicine practice in Calgary (and also happened to be the physician for many local pro and amateur teams). He had a partner who was leaving, and he asked me to join the practice. The offer was too good to pass up: I’d be able to train on the job and jump right into working with teams. This would be my first taste of what a professional career in sports medicine was all about. I started working with the Calgary Hitmen (WHL) and soon after became affiliated with the Calgary Cannons (AAA baseball), the Calgary Roughnecks (NLL), and the Calgary Stampeders (CFL). After that, I was fortunate enough to begin working with Hockey Canada attending numerous international events including Men’s World Championships and the World Junior Hockey tournaments where I was team physician six times, winning gold 4 times. This was a big jump for me. I developed a lot of meaningful relationships and got to travel around the world.

What kind specialization prepares you best to succeed in the world of pro sports?

For me, family medicine was great preparation for covering teams locally and during international travel. While there are some team physicians with backgrounds in emergency or orthopedics, family doctors make up the majority of sports medicine physicians - which makes a lot of sense. You might think that much of my day is spent dealing with injuries that happen on the ice, during practice, or games, but, the truth is, I’m more often treating coughs, colds, headaches, gastro, rashes, and mental health issues—a family medicine background is very useful to handle everything that comes at you.

What kind of relationship do you have with the players (aka. your patients)?

The players are my patients, and, over time, you get to know them well. Some guys are anxious, some are laid back, some of them you need to push, and others will push themselves when they shouldn’t. It comes down to knowing each individual athlete: what’s influencing them, where they are in the hierarchy of the team, even what their contract situation is—all of this helps you relate to them, communicate with them, and, ultimately, care for them in the most effective way possible. What are their fears, what are their expectations? How can I make them feel validated and listened to? Building these trusting relationships is a huge part of what I do, because the truth is (and I know this firsthand) the locker room can be a difficult environment. I always try and make sure that I offer the players a safe space where they can tell me what they need to tell me, unload their concerns, share their anxieties. They know that whatever they tell me won’t go anywhere.

I’ve been with the Calgary Flames four years now, and, during that time, have come to understand the patterns of a day, month, and season, and can plan around them. For home games, I spend mornings in my outpatient clinic, take a break in the afternoon, then arrive at the Saddledome around 5:30pm for pre-game preparations. I check in with active players to see if they need anything, and check on the guys who are injured and sitting out. I’m there near the bench to deal with anything that might happen during the game. The National Hockey League’s policy is that the home-team physician takes care of all the athletes—that means, if anything happens to an opposing team’s player, we take care of them. The day after a game, I’ll have morning clinic hours at the rink to assess any injuries from the night before or any new problems, then head to my outpatient clinic.  When we’re on the road, it’s a whole different pattern. I’m there alongside the players, from the airport to the hotel to the rink and back. Not all NHL teams travel with a doctor, but the Flames do, and this kind of day-to-day interaction with players provides opportunities to get to know players better, and having that kind of rapport is important.

Why is it so important to connect with the players like that?

It’s all about developing a relationship where they trust you have their best interests as your number one priority. This relationship extends to their families as well—sometimes, after an injury, I’m the one on the phone with their wives or parents to let them know what’s going on. You eventually learn that the players want a familiar face they trust around, they’re reassured by your presence. In addition to being a doctor, I’m a counsellor, and sometimes just a sympathetic ear.

How important is the mental health aspect of care for professional athletes?

I am impressed by the amount of importance that pro sports teams are placing on mental health now, the culture is changing for the better. Mental health issues are common in pro sports, which makes so much sense, considering how much pressure the players are under, and the levels of anxiety and stress that they have to deal with. Think of the players who are at the end of their careers: it can be a difficult transition, giving up the only thing you’ve ever known – it’s been their identity for their entire lives – and sometimes I’m the one who has to have the difficult conversation of retirement with these guys. Luckily, the NHL/NHLPA is very effective at preparing players for their post hockey lives. This is where you see the benefits of working with a major professional sports team: the resources are pretty much unlimited. I have access to some of the top specialists in every field, all across North America; from psychologists to neurosurgeons. An expert opinion is never out of reach.

What advice would you give to young physicians who want to pursue a career in sports medicine?

Don’t be afraid to get involved in team coverage, it’s a great way to grow as a sports medicine physician. When it comes to sports medicine, there’s a lot of work available, but I sometimes see a hesitancy in younger physicians—they’re often not as familiar with this path as they are with some of the more common medical careers, and they’re a bit fearful of the experience. But there’s a ton of support out there. At our practice (Group 23 Sports Medicine in Calgary), in particular, we set it up so that doctors fresh out of residency can go out and get experience with teams right away with experienced physicians as mentors. I think this really helps young physicians get a handle on what sports medicine is like, day-to-day. My guiding principle in life has always been: do what you love. And I love going to work every day—I see it as a privilege to be there at the rink working with some of the best players in the world. I wouldn’t want to be doing anything else.

Dr. Ian Auld
Dr. Ian Auld was born in Victoria – the middle child with 2 sisters. He completed his BSc. in Kinesiology at the University of Victoria and then moved on to medical school at UBC. Upon graduation, he moved east to Calgary for a family medicine residency, graduating in 2001. Dr. Auld has been working in the field of Sport Medicine since 2002, holding team physician roles with the Calgary Hitmen (2002-2014), Calgary Stampeders (2013-2014), Calgary Roughnecks (2002-2014) as well as head Physician roles with the National Men’s Water Polo team and the National Alpine Ski team. Today, Dr. Auld is the Head Team physician for the Calgary Flames. He’s married with 2 kids Evan (12), and Carys (9) and he remains active in competitive cycling in his spare time – not the mention the numerous national medals in road, mountain biking and cyclocross racing.