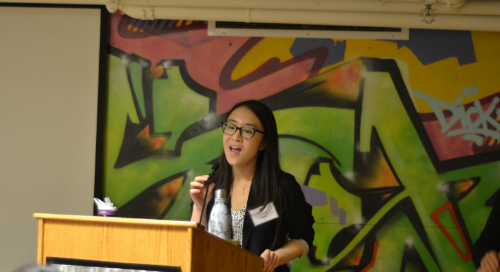 The CFMS–MD Financial Management Leadership Awards recognize passionate, dedicated and caring medical student leaders throughout Canada who have made innovative contributions to their schools and communities

To guide and serve others during their most vulnerable and painful moments was what inspired Tina Guo to pursue both medicine and advocacy for marginalized populations, and it was the story of her close friend that refined her interest in empowering those who are battling with domestic abuse. As a third-year medical student at the University of Calgary, Tina has served as the Founder and Co-Executive Director of the Students Against Domestic Abuse Association (SADAA), the first student-run initiative of its kind in Canada, and currently a member agency of the Calgary Domestic Violence Collective. “When I was in high school, one of my closest friends confided in me about how she had been seeking counselling for weeks because of the domestic abuse she had sustained as a child,” Tina recounts. “She defied the common narrative that portrays domestic abuse survivors as poor, uneducated victims with low self-esteem. She was diligent, friendly, and persistent, and I thought that it would be such a shame for others to never hear the true stories of survivors like her, people who strived to embody resilience in the face of difficult circumstances, and who excelled in every domain of their lives.”

This story of Tina’s friend became the origin story for SADAA. Noticing the lack of any organization or initiative on campus that focused on addressing domestic abuse and dating violence, Tina recruited a team of students across multiple faculties and disciplines, ranging from the sciences and engineering to social work and medicine, to become SADAA’s executive team. “Domestic abuse can affect anybody, and everybody has the capacity to effect change and raise awareness about domestic abuse and dating violence in their communities,” Tina says. “I wanted the diversity of SADAA’s executive team to reflect that.”

Since its founding, SADAA has organized three annual Road to Resilience Conferences, attended by over 210 students, faculty and staff members, and local community members. The Conferences consist of keynote speeches from survivors; a panel discussion featuring survivors and experts from a variety of disciplines, such as medicine, law, counselling, and academia; and video-centered small group interactive activities that harness portrayals of domestic abuse in the media to stimulate critical thinking and meaningful discussion around the issue. In addition, the Association has organized a fundraiser for the Calgary Women’s Emergency Shelter, as well as two annual YW Walk a Mile in Her Shoes on Campus fundraisers for the YWCA Calgary. All of these events have earned widespread praise from both the University of Calgary campus community, as well as the local community, and have even led to SADAA winning multiple accolades for its innovative and personally impactful initiatives.

Tina credits her years with SADAA as among the most influential in transforming her as a leader and a person. “Working with SADAA allowed me to not only learn about and learn from domestic abuse survivors, but it also enabled me to learn humility, open-mindedness, and generosity of spirit from my team members,” Tina explains. “I have been so fortunate to have an unparalleled team over the past three years, and without them, SADAA and I would both be nothing.”